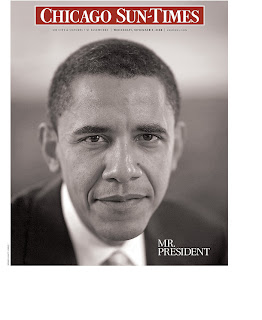 To be honest, the historical context did not hit me until after the win. I told my wife that he would win after Iowa, for no other reason than I thought the he was the best democrat in the field. I went back and read his books and saw what others we seeing in him. Like most black people, I wanted him to win, but up until the last minute felt that something fishy would happen and change the outcome. While other people want to claim he is the next Lincoln, I just see it more simply. Over the last several elections, the winner has been the person that is the most comfortable in his own skin. I think George Bush has been one of the worst presidents ever, but you cant deny that he was self confident in a way that Kerry and Gore simply were not. For all of Obama's organization and get out the vote efforts, I still think he looses the election if he doesn't have this inner strength. This is something Hillary and her team, never quite understood.


It wasn't until I saw Jesse Jackson crying until, that the living history caught up to me. For him to see his friends beaten and murdered for the right to be treated a citizens. To see the federal government take active steps to try to destroy the civil rights movement. To you have you own life threatened on so many occasions for simply attempting to assert the rights that others take for granted. When his tears flowed, mine did to. It seems much of the country was having that moment as well.
Posted by Michael Murray at 9:43 AM 1 comment:

I dropped a couple of new videos on you tube last week. The first is called message to the black man, the other is called message to the white man. Originally I was just going to drop a single video to black folks. I actually had a draft ready 6 months ago, but it never felt right. I was using different music and it was coming across as too soft. The second video actually came together in a weekend. They are far from perfect, but I like them. They compliment each other well and I think they make arguments that are hard to refute.

My biggest issue is trying to say something fresh and structure them in a way that is interesting to me. I never know if people will like them so my first goal is always to make something that I find compelling. The Fredrick Douglass quote was something I can across very late in the process. I just love it.
Posted by Michael Murray at 9:15 PM No comments:

So I am rolling through Oakland near eastmont mall. I am not saying that this is a bad part of town, but you need to keep your head on a swivel because some crazy shit could happen at any moment. As I stopped at the corner, I saw a man selling t-shirts that read Ugly Nigga in large typeface. I was surprised, for some reason I would not expect him to be so bold as to showcase a shirt like this, but I was also intrigued. I asked him how many of those shirts had he sold. He didn't happen to sell any while I saw him so I assumed he would say 6-10. I was shocked when he said about 700. I said "YOU SOLD 700 OF THOSE SHIRTS". He then proceeded to tell me that ugly didn't really mean ugly in the traditional sense. In this case ugly meant hard, like life is ugly in the ghetto. He then told me that SOME people use the old definition of the word Nigga and some people use a new definition. Some people get it and some people don't.

Hey, I maybe I just don't understand. Those bitches over at Webster's should stop waisting their time putting a dictionary together. People can flip definitions on anything. I have a few. I am going to make up a few shirts of my own. I wonder if I can sell 700.

* Stupid Motherfucker - Stupid as in crazy as in wildly emotion. Motherfucker now means one who loves his mother.
* Punk Ass Bitch - Fun loving and carefree
* Low IQ - One who does not need education
* Sell Out - A good salesman
Posted by Michael Murray at 1:47 PM 1 comment:

I just uploaded my latest video called Race? This one was a little different for me. Most of the information came from a documentary I saw a couple of years ago. I was having an argument with someone and they just could not get past thinking about people in terms of their so called race. Until people can understand that the concept of race is just a myth, it will be continually more difficult to make progress going forward.
When I first came up with the concept all I really had was the song, the website, and the visual of kids morphing in my head. Trying to pick up just the salient points from the website was a pretty large task, but I am happy with the result.
Posted by Michael Murray at 8:21 PM No comments:

I received an email the other day from a professor at Western Illinois University. It seems that her class was studying negative media images and came across my Minstrel Show video. She said her students very much wanted to know if I were white or black. After I responded that I was in fact black, she said her students were surprised to hear this because they would not expect a black person to be putting down their own culture.

Considering that the students are future educators, it speaks volumes as to the current state of so called race relations. It also makes me want to work harder to let people understand that what they see in music videos and on TV does not represent the values of most black folks, but its simply the most commercially viable narrative delivered for corporate efficiency.

Wait until they see Punk Ass Negros.......
Posted by Michael Murray at 1:12 PM No comments:

This administration loved to say that those who vote against them are sending a positive message to those seeking to harm Americans as if they needed any new or additional motivation.

What message does it send to the American public when high performing prosecutors are dismissed after prosecuting criminal politicians of a particular party.

Posted by Michael Murray at 10:18 AM No comments:

I just finished Punk Ass Negros Pt. 1 a couple of weeks ago.

I was actually planning on creating a video on the topic of race as a political rather than biological concept, but this came to me one morning when my son woke me up. It normally takes me several weeks to go from concept to implementation. PAN took about a day.

Its been out for a little bit and its always surprising to me to see what folks think of the videos. Sometimes they see things that I never intended. Other times they assume I mean things because everyone brings their own history to the viewing. I appreciate all comments ad most have been positive.

In this video I list my definitions. There are a few in there that are jokes, but some people don't pick up on this. Its also a little strange to me how few people know about 529 accounts. At least a dozen people have mentioned to me that they didn't know what it was before the video, but they looked it up after watching.
Posted by Michael Murray at 12:18 AM 1 comment:

Michael Murray
I am a simple man and I like things the same way. I am the luckiest man in the world and I am thankful that I have been fortunate enough to have my life fall into place so wonderfully.